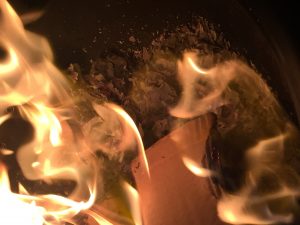 The kind of trauma that creates c-PTSD. Let alone the phenomenon of feeling-flashbacks. Still so little understood.

And there is nothing that better feeds the fire of my nuclearly destructive flashbacks than having my roar met with defense, reasoning, alternative perspectives, New Age Being of Light Instant-Forgiveness-Tablet spiritual bypass sh*t, or silent rejection.

I am sorry to every poor soul whose anger I ever tried to assuage, divert or make wrong. I just didn’t understand the necessity, let alone the vitality. And of course more than that, the birth of the c-PTSD I live with was a violent birth. As soon as I could, rage was banished; from me, and if I could, from everyone around me. I was never going to inflict on anyone else what I witnessed and what had been inflicted on me, and I was never going to turn into that. But if you kill the rage you kill the fire: the passion, the drive, the creative crackle, the joy, the intuition, the play, the roaring laughter, the protective instinct, the capacity to forge and hold boundaries and say – and howl – ENOUGH.

I am grateful beyond words to John Lee, the author of Facing the Fire, who showed me how to stop hiding the light of my flames and gave me permission to burn.

Now my rage is back and sometimes it feels like it might burn forever. And hell, but it actually physically burns. When it comes, in the pit of my stomach, it sears and it contracts. It feels just like some batholithic subterranean worm that was slumbering like a fat wet slug of gentle and inoffensive grief and now is turning and heaving grinding plates of stuck earth against each other above it until it lifts my rib-cage and twists my detest-ines. I wonder at how I ever kept this monster down for so long. The energy that unconscious feat has been stealing from me is inconceivable.

So tonight after reading a deeply unkind and unjust email, I burst into flames and I let it burn me like a torch. And after howling, spitting, punching kicking and battering (poor pillow, great bat), I dragged my fire bowl into the back garden where I shredded tore and twisted my enormous stockpile of packaging paper and boxes, and felt so sorry that we have all mostly lost our ancient earth-based traditions and rituals, and so glad I could understand my rage as my fire, and my allowing it to burn me as my calcinatio of transformation. I knew with my whole heart that this was nothing to do with wanting or needing to burn away, leave behind, or offer up the anger itself, to be free of it. Don’t take it from me! It may as well be my child stolen away and kept till now in darkness and only just brought home, for the fierce protectiveness I feel for it these days. The firebowl was my honouring of these forces in me – of me – that feel so awesome that it amazes me that I could have that howling around in my gut and yet stand still and have no-one notice.

But I sensed that I was needing to burn away still more of my resistance to my own and other people’s anger, and more strands of those attachment-at-all-costs-vines that keep me tied to people who repeatedly hurt me, as well as those who can’t give me space to roar from time to time. I’d like to start believing that if they can’t take the heat, they don’t get invited to the bonfire party…