#CwG – in and through nature 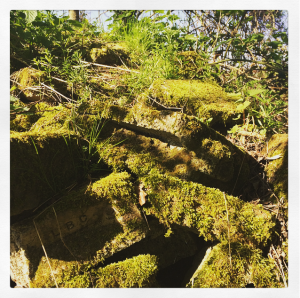 With only three weeks left until my weekend workshop on meditating in nature for anxiety sufferers, this weekend I’ve been starting to prepare.

I think the best bit of the workshop design is the Sunday morning walking in nature meditation over my beautiful Riddlesdown, and yesterday was the practice run.

And I can say without hyperbole that it was the best three hours of the last two months.

The approach we’ll be exploring during the workshop is all about reconnecting with our physical bodies, using the breath, in nature, and with an openness to encountering something sacred, something greater than ourselves, and yet within ourselves, closer than our own thoughts. Something that can comfort and guide those of us who live with daily anxiety and have learned to be afraid of the physical sensations of fear. Something that some people choose to call God, although many struggle with that word for lots of very good reasons. It’s about discovering what gets in the way of having a relationship with our own Divinity. It’s about finding new ways of understanding what loving advice God might have for us in any given moment if we learn to tune in.

Because the workshop is partly and unashamedly about #CwG – conversations with God – I could say that interest is, er, minimal! I suppose for most people it’s hard to imagine a workshop that’s anything to do with “God” without being religious or close-minded. It’s almost impossible to represent my own liberal and inclusive view in the promotional material. Perhaps I should have called it something else.

Until yesterday, I was starting to really worry about having to cancel and reschedule.

But as I was walking, enjoying and refining the meditation process myself, I realised that, if it weren’t for the prospect of running the workshop in three weeks, I probably wouldn’t be out in nature giving myself three uninterrupted hours of grounding meditation and connection with myself, my body, my soul or my God. And right now, especially only seven weeks after the motorbike crash, I really need this time, because neither my body nor my mind has recovered yet. Similarly, if it weren’t for the rotten pain in my right hip, I’d probably be doing the walk at a lick, instead of really slowing down and connecting with what I was being shown.

At the end of the mind-focused meditation, I was given the bricks covered in moss in the photo, and it has me wondering whether some of my ways of thinking about things, which I think of as part of my true nature and identity, are in fact “man-made” – constructions, survival adaptations, that have been in place so long that it’s easy to miss their true nature. 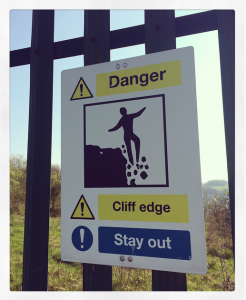 At the start of the body-sensation-focused meditation, where we really connect with what it’s like to feel fear in our bodies, I was given this absolutely perfect confirmation of the whole message of the workshop – that we have lived trying to stay out of, keep away from, the cliff edge of fear, that we avoid it, fence it off, but it doesn’t work. And yet when we look past the danger sign, and are willing to explore what lies beyond it, there is a peaceful place, dappled in sunlight, waiting for us.

During the emotion-focused meditation, I was standing at the bottom edge of an entirely hedge-contained meadow, feeling a gentle swell of sadness behind the sensations of fear I was working with, and was ‘given’ a word that I have probably never used in my life, and which will make people who know me laugh out loud. Modesty. And so I’m reflecting on it, turning it over metaphorically in my hand. What would a modest attitude to the workshop look like? A modest attitude to my anxiety? Am I trying to provide “the” definitive answer for anxiety sufferers by taking them into nature? “The” definitive perspective on faith? Or is this one cluster of ideas, that might be useful for some people, and maybe even just important for me, in my faith journey and relationship with fear?

During the intuition-focused meditation I noticed I was not feeling renewed like I usually am by the time I get to the final round of breaths. I was on a very straight, well-maintained path, there were more people, I could see a car park ahead, and I felt frustrated that the practice “wasn’t working”. I wanted to be further back, where I’d felt more solitary, and where the view was more natural. I wondered what God might be telling me about my relationship with my intuition. Maybe I don’t like its straight-talking. I wondered what my intuition itself was telling me. Maybe I need less time around people than I allow, and even more time alone in nature myself. Or maybe whilst I think I like directness, cutting to the chase, getting on with it, actually what I love is mystery, meandering, and not knowing what’s around the curve in the path or over the stile. 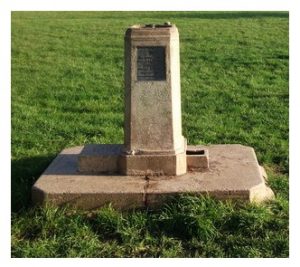 Just as I was accepting my frustration, having passed what I had assumed was the end point on my planned route, I arrived at a Corporation of London drinking fountain. A beautiful and old-fashioned but fully working limestone stand with a working tap and cool flowing water. I was curious. If intuition is fire in the elemental model, then water is the emotions. I remembered the Buddhist teaching about the bird with one wing which flies in a circle; about the need to balance wisdom with compassion lest it be brutal (and compassion with wisdom lest it become collusive). I’ve been working a lot with my fire recently, and it’s been necessary, but it is also probably time to remember that trying to fight everyone, and let them know what they’re getting wrong, is not going to get me where I want to be.

I had a drink, I imagined all of us on the workshop stopping to have a drink, and to splash our faces and rinse off our hands, and all of a sudden the walk felt complete. I felt refreshed, inpsired, and convinced again that, regardless of anyone else needing this workshop, I need it.