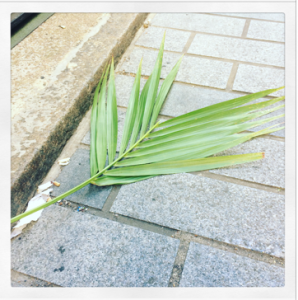 This sight stopped me in my tracks on my way into work this week. Laying in an unswept side-alley, between a sushi restaurant and a police station, amongst cigarette ends. A palm frond. Three days before Easter Sunday. In the same week that my ‘poem from Him‘, written last Easter, had fallen twice from its shelf.

I wanted to know what the message was that I was supposed to understand.

I’ve trusted for a long time now that God can communicate with us in all manner of ways if we want to pay attention and listen. It used to be songs stuck in my head. Often it’s posters that catch my eye. Increasingly it’s things in nature that for some reason stand out (I’ll be exploring this in my workshop at the end of this month), or just curious or out of place objects. I don’t think it matters what it is. Just that we’re open to listening.

I already knew that people of Jerusalem are supposed to have waved and lain down palm branches when Jesus rode into Jerusalem, five days before his crucifixion and one week before his resurrection. A bit of reading told me that in Ancient Rome, the palm branch was associated with victory, and that in Christianity, it came to symbolise specifically the victory of Spirit over “flesh”.

But something about the context was nagging at me.

I got excited when I discovered that the date palm is known as Phoenix. Resurrection, rising from the flames? 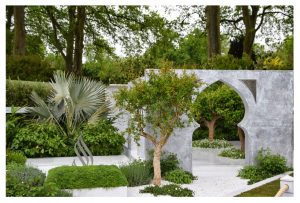 But when I found references to palms symbolising peace, and especially paradise, something in my gut stirred.

Here was a symbol of paradise, laying in a gutter practically, next to cigarette ends, in an unremarkable if not ugly alley off Bishopsgate. And I noticed another feeling. A spike of grief in my heart when I read that the palm is a symbol featured in the Jewish, Muslim and Christian faiths alike.

Victory. Peace. Paradise. In the dirt – the real world, here and now, not the hereafter. In the faiths which seem to be most at war with one another (and within themselves).

Most days, and especially in the last few months, the news tells a different story, and the prospect seems an utter, despairing impossibility. I’m incapable of any erudite political or theological commentary on this. It just hurts to look through information windows into the world and see so much hatred, war, and violence supposedly in the name of faith. I left my last church after hearing several members stand up on one particular day and talk as if they represented everyone present about the importance of converting Muslims, and how mistaken Muslims are in their faith. I’ve searched my heart for years about this, and a handful of other sticking points, and I’ve asked Him to show me what it is I don’t understand, but so far all that has happened is the deepening of my conviction and conscience that we must live in peace together, sharing our love of God, so beautifully and diversely manifest in this physical world through a myriad of exquisite faiths – monotheistic, multitheistic and nontheistic. Surely the complete mystery of the Trinity tells us something about the impossibility of fully grasping the infinite faces of God?

Suddenly I’m in mind of Romans 12,

For by the grace given me I say to every one of you: Do not think of yourself more highly than you ought, but rather think of yourself with sober judgment, in accordance with the faith God has distributed to each of you. For just as each of us has one body with many members, and these members do not all have the same function, so in Christ we, though many, form one body, and each member belongs to all the others.

What if this were just as true of all the faiths as it is of different kinds of people?

But in this world? In this messed up imperfect world, how could it be possible that paradise is anywhere to be found, here, now, in the grit?

I only have two thoughts which surface.

Firstly. Part of the difference between us, and God, it strikes me, is that we are limited: in our vision, our capacity, our understanding of cause and effect. And yet through us, with our faith in That which transcends us, more can be achieved that we could possibly understand, through choices seemingly far too insignificant to be of any use.

Secondly – and here’s the absolute challenge for those of us who identify with being so-called fifth-plane souls in the Sufi tradition – perhaps paradise can be found around many corners at many times right in the middle of the mess and grit and imperfection which we wish we could render absolutely pure.

Perhaps we need only to be willing for that to be part of the truth, and to be paying attention.